Grab your broadsword, down a cup of ale and say a prayer to The Seven: it’s Game of Thrones week. I’ve made no qualms about my love/hate relationship with George R.R. Martin’s fantasy brainchild; where death is certain, betrayal lurks behind every corner in the Red Keep and happy endings are as rare as dragon eggs.

But as much as GoT has a propensity to shatter my happiness on a weekly basis, it was still one of the driving factors to my visit to Dubrovnik, Croatia last spring. Exploring the dusky back alleys and secret crags of Kings Landing was a one-in-a-lifetime experience, and served to reinforce my affinity for the world that George R.R. Martin has created. 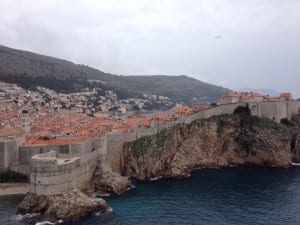 The addictive anguish is real—and it returns to HBO for a new season on Sunday.

After making history at the Emmys in September, the show is at an interesting crucible in its existence. Martin’s struggles in writing the next novel in the series are well-documented, so showrunners David Benioff and D.B. Weiss find themselves at a cultural crossroads. The show will now eclipse the timeline in the books, so—with help from Martin’s notes—Benioff and Weiss are now the shepherds of the story.

The A Song of Ice and Fire novels are globally beloved. George enjoys a Tolkienesque infamy, so it’s fair to say that HBO’s upcoming season will be under a massive microscope. Can the series production team do justice to a larger-than-life tale without concrete source material? How much artistic license is being extended to Benioff and Weiss?

Will it diminish readership for the forthcoming sixth book?

Thrones enthusiasts—myself obviously included—are a famously impatient lot, so this season will prove an intriguing cultural study. Regardless of the level of fan response, there’s guaranteed to be lots and lots of blood along the way.