Game of Thrones: A Lesson in Addictive Anguish 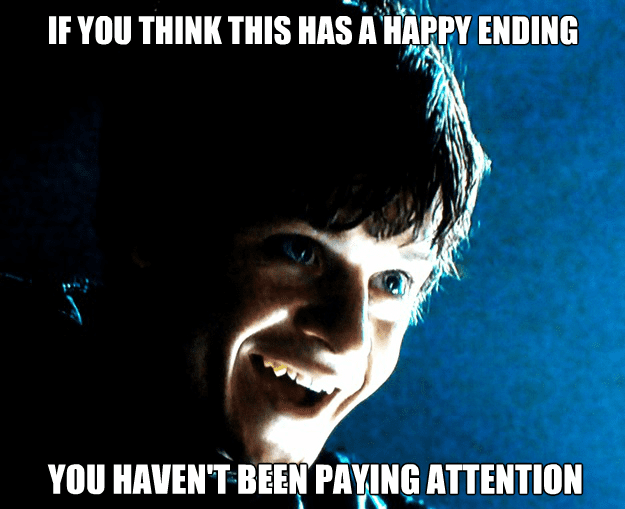 Well, Mr. Martin, you’ve done it. You’ve effectively given me post-traumatic stress disorder from a television show. You drained all my hope and optimism and left them dying on a dining hall floor in Westeros. And while the majority of Game of Thrones fanatics attempted to super-glue the pieces of their splintered psyches back together, I could almost hear the sinister, Mr. Burnsian cackles coming from you and your HBO cohorts as you profited from our collective heartbreak.

Since it debuted on the premium channel in 2011, Game of Thrones has taught us harsh lessons on traditional fantasy dramas, and enjoyed skyrocketing ratings and increased book sales of the A Song of Ice and Fire series as a result. Martin’s main caveat for his take on the medieval saga: honor is rewarded with cruelty, and in the game of thrones, it’s not a question of morality or personal standing: but how well you play. This isn’t your childhood fairy tale; this is Westeros, where your favorite characters are as expendable as yesterday’s meatloaf and treachery is synonymous with supremacy.

The series set the tone for this narrative with the shocking execution of the key protagonist (and marquee star, Sean Bean) in the first season’s penultimate episode. Since this grisly precedent was set, fans have come to view episode 9 with a sense of anticipatory anxiety, and the model has held true, as last season contained the stirring Battle of Blackwater Bay, and this season, well – I’m still recuperating from what took place Sunday night.

While there is absolutely a place for Prince Charmings and happy endings in film and literature, Game of Thrones is not that place. What is it about this series that has the masses clamoring for Martin’s unique brand of unbridled brutality and bleakness? We know it’s going to inevitably leave us feeling hollow, yet we take our places in the living room every week to witness it all firsthand. The answer is mould-breaking storylines that avoid the traditional pitfalls and formulaic themes that pervade the majority of novels, television and movies. The clichéd boy meets girl/boy loses girl/boy gets girl scenarios that are cloaked in predictability from the get-go, and breed a palpable feeling of ambivalence towards an entertainment industry that increasingly values ratings over an inventive and polished final product.

Game of Thrones harkens back to the days of television when soaring popularity and matchless creativity were mutually inclusive, even when they led to a post-viewing period of emotional turmoil and disorientation. It is proof that above all else, an audience desires ingenuity, and the wide spectrum of emotions that accompany it: shock, grief, rage, despair and triumph. Like strapping into a thirty-story hypercoaster with a 90-degree initial drop, viewers want to be scared out of their minds – yet enjoy every second of the ride, and breathe a satisfied sigh of relief when it’s over.

George R.R. Martin stated that he ‘wanted his viewers to hate him’ after watching this recent episode, and judging by the immediate furor on social media outlets, it appears he achieved his goal. Regardless of our shared Red Wedding hangovers, HBO’s adaptation of Martin’s novels will continue to flourish, and viewers around the globe will await the refreshing, magnificent misery that is Game of Thrones.