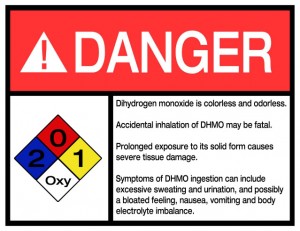 Regardless of how calendar-conscious of a society we’ve become, April Fools’ Day inevitably catches a few of us off-guard, and for a few fleeting moments we fall victim to faulty memories and gullibility. The most publicized prank came at the expense of an ill-informed community and a couple of country DJs who overestimated their audience’s April-awareness.

The Prank: Naples, Florida’s Gator Country 101.9’s morning-drive show, featuring DJs Val St. John and Scott Fish, announced on-air that the city’s water supply had been contaminated with ‘dihydrogen monoxide.’ For the unfamiliar or those that never caught an episode of Bill Nye the Science Guy: dihydrogen monoxide is the chemical name for water – two hydrogen atoms, one oxygen atom – or, H2O.

The Result: Concerned citizens flooded the local utility company with calls regarding the safety of their water. This resulted in exhausted and exasperated customer service representatives who found themselves giving impromptu chemistry lessons over the phone throughout the day.

The Aftermath: “It is one thing when radio stations change their format or other crazy things they do. But you are messing with one of the big three — food, water or shelter. They just went too far.” This was the statement that program director Tony Renda gave to the media, after announcing that the two DJs had been suspended indefinitely.

Their suspension immediately reeks of a public relations exploit, especially considering when you visit Gator Country’s site you’re greeted with a listener poll as to when they should return (75% never, really?). From my vantage point it appears as an April Fools’ gag gone awry and the station is riding the resulting visibility wave by turning this into an elongated bit.

The Benefit: Did you ever expect our weekly blog to feature a story about broadcasting heavyweight (slight snark) Gator Country 101.9? Neither did I. The story has circulated on a national level, and at least for the meantime is providing a heady level of awareness for a lower-level radio show existing in relative obscurity in Lee County. The long term impact this will have on Val St. John and Scott Fish’s careers remains to be seen, but in the very least, they can say they were featured on Good Morning America, and that’s more than most morning drive country DJs can claim.