The Visceral World of VICE Reporting 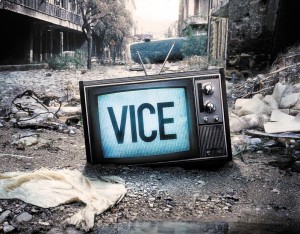 Documentarians are no stranger to the risk that accompanies their craft. Active warzones, nefarious characters and the threat of personal peril are staples in any hard-hitting documentary, but no one seems to do danger like the gang of madmen over at VICE Magazine.

Unfiltered and unapologetic, VICE’s heady subject matter is not for the faint of heart; but with the mainstream media largely ignoring many of the topics they choose to cover, they are providing the public with an invaluable outlet to view the world as it really is. Entirely too often, what makes the evening news or the front page is dictated by political or corporate interests, and by the time the final product reaches the masses it is so watered down with rhetoric and hyperbole that the story is a shell of its original incarnation.

Their guerilla documentaries, available for free online, have taken them to the war-torn tenements of Liberia and to the radioactive wilderness of Pripyat, Ukraine; and now, their reputation for providing gritty, no-holds-barred reporting of little-known news has led them to a new series on HBO.

Along with the surface entertainment value that comes with placing their filmmakers in remote locations and possibly in harm’s way, VICE’s Travel Guides have illuminated stories from around the globe that would otherwise go unreported. Their debut episode on HBO had them investigating political assassinations in the Philippines, and taking an in-depth look at the new scourge in the War on Terror: child suicide bombers in Afghanistan.

VICE’s main detractors like to lump their brand of docu-news into the pile of publicity stunt journalism, where the story takes a backseat to the shocks. CEO and co-founder Shane Smith had this rebuttal for those who wish to marginalize their efforts: “People think because Vice is irreverent and because we’re crazy, we’re stunt journalists. You know what? I don’t actually care. It’s our job to get into the hardest-to-see places and bring back the best footage—we have the best footage of North Korea ever shot. If that’s a stunt, then I’ll keep on doing stunts until I die.”

It’s this brazen attitude that permeates through everything that VICE does, and it allows the viewer (or reader) to observe the news through a looking glass of unabashed objectivity, where the stories are allowed to speak for themselves. Restyling journalism as we know it, VICE’s groundbreaking international work is shedding light on the previously overlooked, and providing a voice for the voiceless around the globe.