Miami Marlins Revisited: The Dark Side of PR 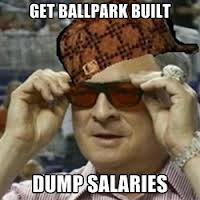 The temperatures across the nation are beginning to rise, the daily morning windshield frost is becoming a bit easier to manage and wearing white is finally acceptable again; this can only mean one thing: baseball season is upon us.

Last year I wrote a post extolling the Marlins for making the branding moves they’ve needed for eons to be viewed as a respectable, competitive organization. Sparkly new stadium? Check. Name change? Check. High-priced free agents to draw attendance? Check. Well, it’s astonishing the difference a year makes, and it is with deep regret that I have to inform the Marlins faithful: you were duped, unequivocally and epically duped.

The architects of this swindle are none other than the Marlins top brass, owner Jeffrey Loria and President David Samson, who pulled the public relations wool over the eyes of the Miami fan base, all while lining their own pockets at the taxpayers’ expense. Gone were the likes of Jose Reyes, Hanley Ramirez and Josh Johnson, the star-power intended to galvanize the Marlins’ base and vault the team into annual contention. By midseason, like rats fleeing a sinking galleon, fans followed suit: leaving a stadium to what amounts to little more than an art-deco inspired post-apocalyptic wasteland with a $1.2 billion price tag.

Yahoo’s! Jeff Passan wrote this scathing indictment that details the ordeal, painting the conductors of a con so diabolically perfect they should either be banished to baseball purgatory or given walk-on parts in an Ocean’s Eleven flick. It was with Loria and Samson’s meticulously orchestrated ploy that the denizens of Dade County learned two unfortunate lessons: if it seems too good to be true, it typically is, and PR blitzes can be used for good and evil.

The Marlins’ public relations kamikaze culminated with a series of ill-fated press conferences, wherein Jeffrey Loria steadfastly defended his decision to sell-off his high-priced talent, and further alienated and infuriated whatever remained of the Miami faithful. The disastrous media tour served to rubber-stamp the fact that not only was Loria and Co. complicit in misleading the Marlins fan base, but even worse, they actually seemed to believe their own falsehoods.

Public relations aptitude involves manipulating the media – not in any sinister sense – but in a way that your barometer is always calibrated to pick up on what’s trending, and ensuring that your message is heard and correctly understood. Loria and Samson reached into their black magician’s bag of PR hijinks and pulled off an extraordinary vanishing act, removing a competitive product from the field and increasing their personal bank accounts to boot. The pair of merry pranksters managed to sucker an entire city, and as a result, baseball in Miami is now as relevant as Beanie Babies and Betamax tapes. Until these co-conspirators are unseated from their pedestals atop the Marlins hierarchy, South Florida will never experience the thawing of January’s frost that accompanies ‘hope springing eternal.’ They are condemned to a perpetual winter where the only warmth is a result of the malevolent wool they are still removing from their collective eyes.