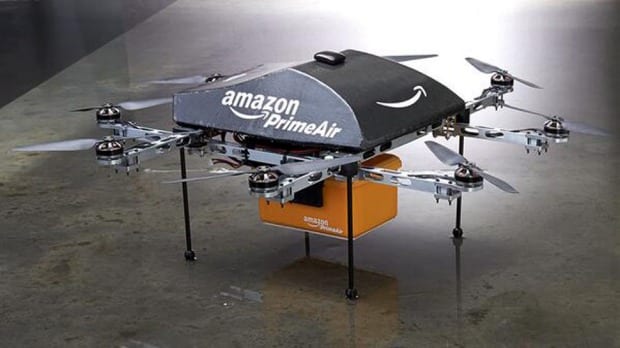 I’ve got an extreme fascination with futuristic scenarios. Blame it on my introduction to Skynet in the early ‘90s, far too young to have viewed the carnage in The Terminator, but it was Arnold Schwarzenegger night in our household and I managed to finagle a seat on the couch. Through countless sci-fi and cyberpunk novels and films this interest in advanced society has only continued to grow, but reality has yet to catch up to fiction: until now. Sunday on “60 Minutes,” CEO of Amazon Jeff Bezos unveiled the future of business-to-customer delivery systems: drones.

Bezos explained the concept behind the drone delivery technology, citing a 30-minute delivery capability from online purchase within a ten-mile radius. Pending FAA approval and any potential functionality hiccups, we should see the aptly-named “octocopters” buzzing above our heads as soon as 2015.

The adoption of robotic distribution has the potential to revolutionize the online-shopping industry by providing what all virtual-shoppers want: immediate gratification. No more toiling over the arrival of the mail guy, no more Christmas-present-opening delayed due to a late-arrival; but the implications of Amazon’s brainchild reach far-beyond the realm of consumer-centric purposes. If Amazon sets the tone for civilian drone-usage, you may well begin seeing them in sectors such as international aid transport, wildlife monitoring or at-home dining.

But this type of revolutionary technology does have its drawbacks. In an economy slowly crawling back from the brink of total collapse, delivery and courier positions are in demand, with an abundance of individuals eager to fill them. Will the role of B2C transport now be filled by trained drone-operators or automated computer systems? Will Saul Berenson be flying my Homeland DVDs directly to my doorstep?

Also, lest we not forget the looming dread of the robot apocalypse.

We may not have the capability to time-travel yet, but with Amazon’s debut of its drone-system, we will soon be able to receive our online-wares in no time flat. What’s your take on this new delivery system? Is this technology a step in the right customer-service direction, or another revolution in the slow churn toward a society dominated by computers and robotics?