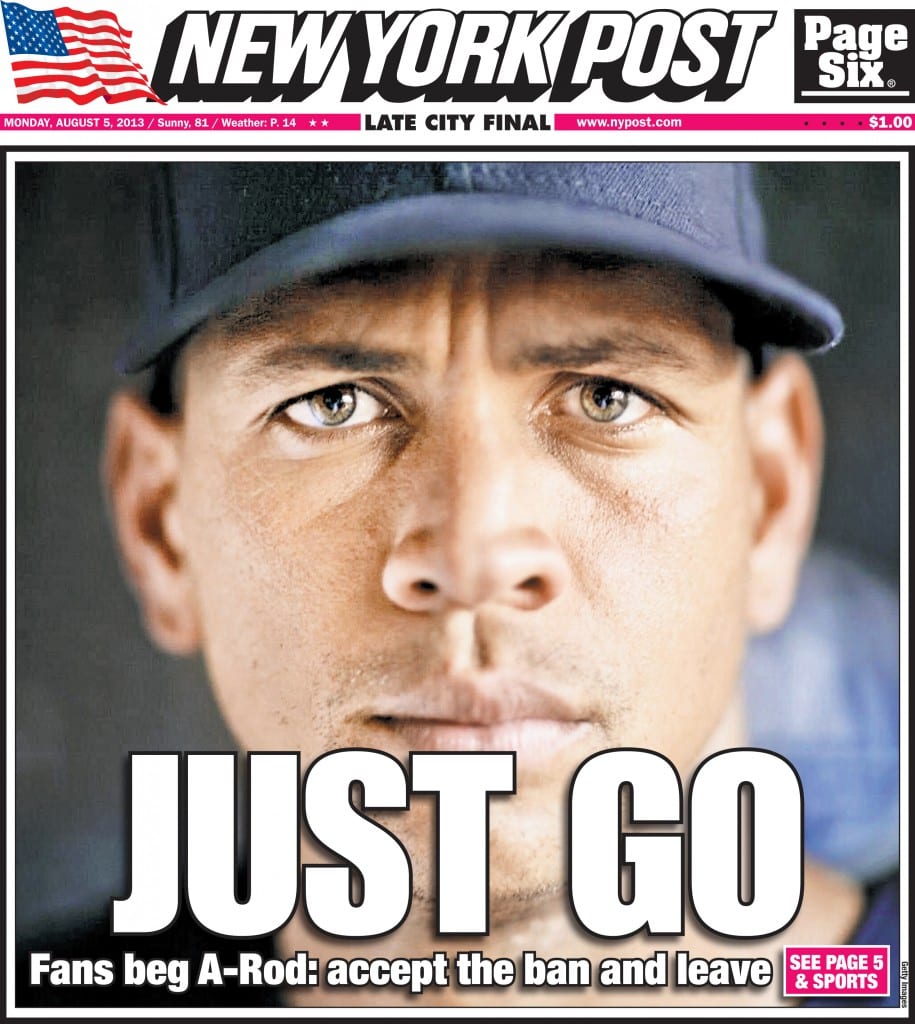 Since he came to the Yankees in 2004, Alex Rodriguez has been New York personified. A man as large as the city he represents; a lightning-rod comparable to the spire that adorns the Empire State Building. He of the veritable caravans of cash, the harem of Hollywood starlets, and the inexorable hubris that accompanies them – he is the walking embodiment of unfettered capitalism. And like a Cesarian twist-of-fate, Major League Baseball – the sycophants that supported and promoted this meteoric uprising – staged a sporting coup d’état, and turned their messianic superstar into a sacrificial lamb for the new guard of the steroid era.

Rodriguez was once trumpeted as the Anti-Barry Bonds. The man preordained to truly eclipse Hank Aaron’s homerun total – the most hallowed record in all of sports – and nail shut the door on baseball’s sordid affair with pharmaceuticals that pervaded the previous two decades.

“Say what you wanted about his braggadocio or his tenuous relationship with the media, at least he’s clean,” they said. “We can deal with the distractions, as long as they’re supplemented with his staggering production,” they said.

And then a 2009 Sports Illustrated report surfaced, alleging positive tests for steroids when he was with the Texas Rangers in 2003, and the carefully crafted façade that was Alex Rodriguez began to crumble. He was not superhuman after all: in fact, he was just as human as any of us; susceptible to the temptations and pressures that accompany performing under constant scrutiny and an all-encompassing spotlight.

With MLB’s latest indictment of A-Rod in the Biogenesis scandal – and the 211-game suspension that comes with it – the Rodriguez cult of personality that baseball’s top brass and power brokers helped create became little more than a propaganda poster for everything immoral in professional sports. A signpost declaring ‘Abandon all hope, ye who enter here.’

At the end of the day, Commissioner Bud Selig had another decoration for his cheaters mantelpiece, and Major League Baseball could wash their tainted hands of the latest indignity that brought attention to the sport for all the wrong reasons.

But baseball fans don’t forget. They didn’t forget the sport’s resurgence in popularity on the artificially-enhanced backs of Bonds, McGwire and Sosa amidst their homerun chase in the late-nineties, and they certainly didn’t forget the Lilliputian slings of contempt launched to take down Bonds when the smoke and mirrors disappeared. Baseball cultivated a culture of herculean giants launching balls into the ionosphere, and then wiped them out once the shift in popular opinion dictated an immediate shift in accepted policy.

Perhaps that’s the saddest aspect of baseball’s steroid saga: that there are no heroes. There were no trailblazers looking to clean up the sport from day-one: only individuals beholden to perception and convenience. Alex Rodriguez fell on the sword when a circular firing squad was more in order: directed at the crooks that sit in the luxury suites and turned a blind-eye to the poisonous track in which the sport was headed when it benefited them, and chopped the head off the snake when it finally didn’t. There’s money to be made in lies and duplicity, and the fact of the matter is Major League Baseball has not solved the PEDs puzzle, they’ve merely provided a whipping boy while they recuse themselves from any responsibility.