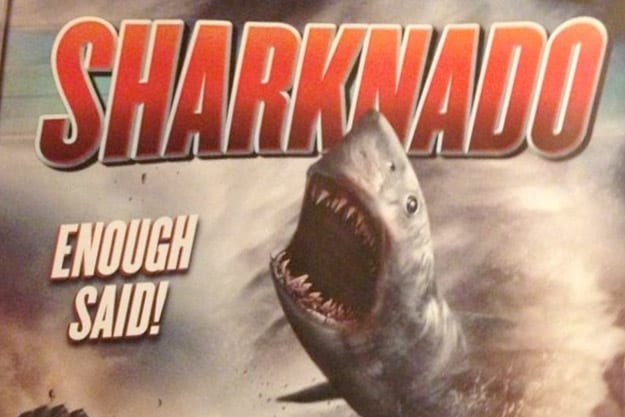 #Sharknado absolutely dominated the Twitter conversation last Thursday, with over 440,000 mentions in 24 hours, and peaking at 5,000 tweets-per-minute during its broadcast. While viewer ratings did not reflect the online uproar, the Syfy network has a bona fide cult-classic on their hands, and word on the street is that a sequel is already in the works.

Sharknado 2?! Can Los Angeles at least get a moment to breathe without the threat of airborne man-eating beasts ravaging Sunset Boulevard?

The success of this absurd film cannot be measured in ratings, but in the social media chatter it generated. By causing such a commotion from celebrities such as Mia Farrow and Patton Oswalt, Sharknado all but secured itself a spot amongst other B-horror flick stalwarts in pop-culture lore (Snakes on a Plane, anyone?). In my estimation, Syfy will make boatloads on the backend with DVD sales and merchandising.

Some of the highlights of the Twitter explosion include Lost showrunner Damon Lindelof’s assertion that he would pen the sequel to Sharknado before the movie was complete, and the Red Cross in Oklahoma offering support to any residents affected by tornadic fish.

Films like Sharknado epitomize everything that’s great about Hollywood. Deep pockets and bizarre ideas? Produce a movie. Regardless of how seemingly miniscule your anticipated audience may be, with a ridiculous-yet-original premise, your viewership and visibility may exceed any expectations – and in the case of Sharknado, fans took it hook, line and sinker.