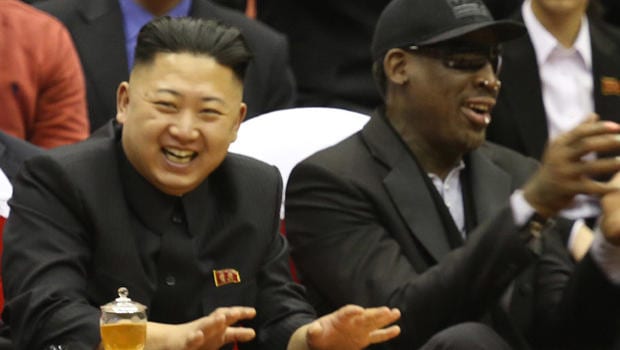 On the list of things that beg for condemnation, referring to brutal, megalomaniacal dictator Kim Jong-un as ‘a great guy’ would appear just behind hating unicorns and ice cream.

Last week, notorious instigator and attention-hound Dennis Rodman visited North Korea with VICE Magazine and the Harlem Globetrotters in tow. The trip, orchestrated by VICE and HBO for a forthcoming documentary on The Democratic People’s Republic of Korea, was originally slated as a guerilla-style look into one of the most hermetic countries in the world, and ended up being a wine-and-dine blitz  hosted by one of the most oppressive tyrants on the planet. The Worm really outdid himself with this one.

Publicity stunts are no strange territory for Rodman, famous for adorning a wedding dress and proclaiming his intention to marry himself, among other absurd acts. This venture, however, treads on some politically treacherous ground, and may in fact have long term ramifications on Rodman’s legacy. Regardless of the leeway he’s afforded as a media-loving firebrand, Rodman rubbing elbows and exchanging champagne toasts with a despot like Kim (while the majority of the North Korean population starves) is a bitter-pill for the public to swallow, even if it’s something you’ve come to expect from him.

Channeling his inner Hanoi Jane, Rodman returned from his journey and did what he does best: made it worse. Hitting ‘This Week’ with George Stephanopolous on Sunday morning, Rodman trumpeted Kim’s character and referred to him as a ‘great guy’ and a ‘friend,’ and ardently defended his trip and his actions; sound bites that are sure to remain in the news cycle for some time.

There’s a delicate line that you toe when executing a PR stunt, as many of the best ones involve some fervor or backlash. A rehearsed meltdown or tirade at a press conference is one thing, singing the praises of an authoritarian dictator who imprisons political enemies in concentration camps and has threatened to exact nuclear winter on the U.S. is another. It’s no coincidence that Rodman made his rounds on the Sunday talk shows and the new season of The Apprentice, on which he stars, debuted later that evening – but generating awareness for the show, if that was indeed his aim, in the manner that he did is unacceptable, and frankly, abhorrent.

Whether Rodman truly believes Kim Jong-un is a ‘great guy’ is his own business, but using it as publicity fodder is distasteful, and will only serve to alienate the few remaining apologists who chalk up his behavior as simply “Dennis being Dennis.” While we all can agree that a productive dialogue needs to be established between the United States and the DPRK, Dennis Rodman and his own brand of ‘basketball diplomacy’ is not the way.