Social Media: Where Change is the Only Constant 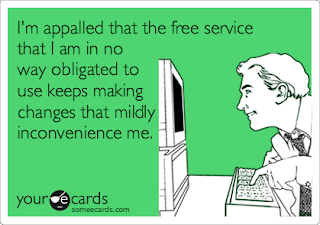 On October 3rd, Facebook will rollout its new ‘Time Line’ interface for all of its users worldwide.  This announcement comes fresh on the heels of the globally maligned ‘mini-feed’ update, which had members inquiring as to why Mark Zuckerberg was making unnecessary changes that rendered his free service difficult and inefficient for many of its users.  Bob Dylan famously sang, “The Times They Are a-Changin’,” which rings especially true in the rapid-fire realm of the Internet, where the environment seems to warp right as it becomes familiar.

Until recently, Facebook was primarily a medium for twenty-somethings and younger people to interact.  Within the last couple of years, the social networking behemoth has undergone a demographic shift that now transcends all ages and generations.  It’s a fairly common cliché that older individuals are steadfastly resistant to change, to the point of outright stubbornness, but the swiftly evolving world of social media has forced everyone to adapt, regardless of readiness or willingness.

In the business and private sectors, for work or leisure, everyone depends on social networking.  Zuckerberg and Co. have cornered the proverbial market, like great puppeteers in the sky, maneuvering their respective mediums in any way they see fit.  Not a fan?  You can delete your free profile.  Feel the changes are too overwhelming or time-consuming?  There are still 800 million people who will disagree with you (fun fact: if Facebook were a country, it would be the third most populous in the world.)  Like it or not, the social media bigwigs hold the cards, and we can go with the flow or get left down-river.

Relentless evolution encompasses every social network, but occasionally the changes really do undermine the operation.  Myspace was the end-all be-all of leisure-based social media websites prior to News Corp buying it out and flooding the main page with ads and distractions (which led to the rise of Facebook.)  Fast-Pitch was immensely popular in the business world until an influx of multi-level marketers and spam triggered the mass exodus of its core users.  Myspace went from a value of $580 million when it was purchased in 2005 to a meager $35 million when sold in 2011.  Fast-Pitch has recently undergone a retooling in an attempt to garner users, but remains an afterthought when compared to business networking sites such as LinkedIn.

There is only one constant in the domain of social media: change.  Expect to be inundated with new features, new settings and new ways of interacting.  Frustration comes with anything that appears foreign, especially when you’re of the opinion that things were fine the way they were.  As you should with every aspect in life, greet new experiences and opportunities with an open mind, and embrace and appreciate your presence in the moment where all you can expect is that nothing will remain the same.