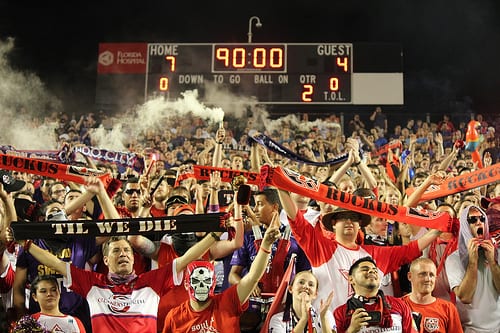 Cities rely heavily on their identity and reputations, as their potential revenue streams depend on them. Any negative press directed at an entire location, such as a spot on an annual crime-per-capita list or widely recognized lack of infrastructure or industry severely limits a city’s ability to draw in tourist dollars that can flow back into their local economies. Orlando, PR/PR’s home-base, has been long-overdue for a reputational overhaul, but not for any of the aforementioned reasons: Orlando simply suffers from a lack of identity, and today, that may change.

This afternoon, the Orange County Commission will vote to potentially approve tourist-tax funding for a shiny new stadium downtown, and effectively rubberstamping a Major League Soccer expansion franchise for the City of Orlando. The prospective vote will make Orlando the only MLS team in the southeast, establish the second major sports organization in the city, and create hundreds of jobs and provide a boon to the local economy. But more importantly, a vote of approval will help The City Beautiful begin to emerge from the fugue-state it’s endured since Walt Disney and Co. came to town in 1971.

Orlando’s national reputation is one of a Formica-formed cartoon town, awash with vomit-inducing rotating teacups and motels fashioned in the theme of dwarves and tree-dwelling forest creatures. These things exist, but not in the City of Orlando. The theme-park invasion that began with Walt Disney World in the seventies contributed to the city’s standing as a tourist destination and little more, but all of the mouse ear sales and overpriced turkey leg consumption take place about thirty miles south, in Kissimmee. Orlando obviously appreciates this tourist-driven economic windfall, but many residents will be quick to point out the societal divide that exists over that thirty mile buffer.

Wanting to separate from this national image, the city has made many effective strides in the last few years to shed its cultural malaise, from the influx of food trucks that have taken root in Orlando, to the recent naming of individual downtown ‘districts;’ but a new Major League Soccer franchise would be the most monumental move thus far.

By nature, Orlando is a transient-city with very few lifelong residents, and as such, sports allegiances are firmly entrenched elsewhere. A brand new team, especially in a sport experiencing such exponential popularity growth as soccer, would put the national spotlight on Orlando, and generate the camaraderie and sense of pride that only exists when rooting for your local club (not to mention the revenue created by vacationers who choose to attend an Orlando City game).

Coming from someone who was raised on Atlanta Braves baseball and denied the international soccer hype-machine for years, the Orange County Commission would be foolish not to vote to approve a new soccer stadium and subsequent MLS franchise. Orlando has much more to offer than theme parks and attractions, and getting behind a homegrown sports franchise is the best way to give the city’s longstanding identity crisis the boot.