Netflix Doubles-Down on House of Cards 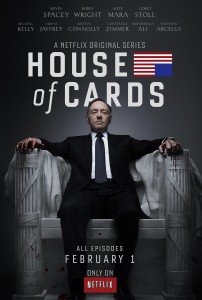 My weekday evenings typically consist of microwaved dinners and abusing my Netflix account. I was preparing for my usual routine last Wednesday when I stumbled upon House of Cards, the flagship made-for-Netflix drama starring Kevin Spacey, sitting temptingly atop the ‘recently added’ section. I recalled the company’s announcement of its own original programming a couple of years ago, as it resulted in a few television channels removing their content from Netflix’s database (wag of the finger to you, Showtime). Three Stouffer’s nights later and I was left blown away by the series’ story arc, Kevin Spacey’s sociopathic portrayal of power-obsessed Congressman Frank Underwood, and Netflix’s audacious decision to take a risk with this series format that has the potential to redefine the television-entertainment industry.

Much like Napster sent record executives scrambling and left many in the legal department at the RIAA pulling their hair out in the late-nineties, House of Cards is Netflix’s declaration of war against the conventional tenets of television production. Shedding the shackles of Nielsen ratings and mandatory advertising, Netflix undoubtedly has TV-execs experiencing comparable levels of anxiety. The recording industry responded with a flurry of high-value lawsuits that effectively shut down Napster, but the precedent had already been set – digital music resonated with the public, and with the inception of platforms such as iTunes and Spotify, has become the widely-accepted standard. Your move, television executives.

By opting to release the entire series at once, Netflix is embracing what makes their service so terrific: subscriber freedom. No longer constricted to the confines of tuning in at a certain hour or setting the DVR, users have the ability to view House of Cards at their leisure, which puts the programming power in their hands. And with the long-awaited new season of Arrested Development slated for release on Netflix in the same format in May, their formulaic transformation of the current incarnation of television-viewing will only continue to garner attention.

Many premium networks have already adopted their own version of the online-model, with services such as HBO GO and Showtime Anytime allowing for streaming content that is unavailable through traditional cable providers. Designed apps for these platforms on tablets and smartphones assures that their subscriber base remains intact and they gain a foothold in a programming marketplace that is moving from living rooms to laptops and Wi-Fi hotspots. The writing on the wall is clear, however, in a corporate-Darwinian sense: TV networks must continue to adapt to a rapidly shifting environment or become relics of the past.

The measuring stick for success of Netflix’s fledgling enterprise will be in year-end subscription numbers versus 2012’s. Will the world’s collective audience follow the trail blazed by the digital music revolution and abandon customary television in favor of a user-friendly, online service? Only time will tell – but this much is certain, with House of Cards and other original programming in their pipeline, Netflix has definitely stacked the deck in their favor.