Getting Humorous with @Skittles

I’m going to begin today’s blog by stating that I am mentally exhausted. The Atlanta Falcons playing hacky sack with my emotions for sixty minutes on Sunday really took a toll on my ability to concentrate, and although we squeaked out a win, I still feel like my psyche was the recipient of a haymaker from Mike Tyson. As endurance and perseverance come with the PR territory, I’m powering through my fatigue to bring you some fresh content for the week.

While lurking the web for potential topics for the blog, I stumbled across this Mashable article outlining Skittles’ hilariously inventive usage of their Twitter account. Is their social media team comprised of lunatics or evil geniuses? That’s certainly up for debate; but what does not need to be discussed is the entertainment value of the content they’re providing. 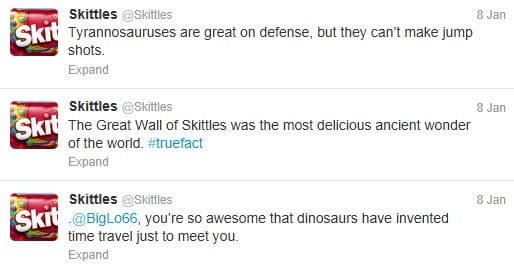 An inherent obstacle in maximizing your effectiveness on Twitter is providing content that other users want to follow. Whether it’s informative and educational with the aim of solving a reader’s problems, or nonsensical and absurd with the goal of humor, you need to create micro-blogs that make people want to engage. In the case of Skittles’ online publicity, 140 characters merely about candy would be excruciatingly mundane, so the company designed a comically bizarre strategy that’s congruent with their commercials and branding.

If you’re embarking on a new social media campaign or tinkering with your current tactics, it is essential to scrutinize your updates before your post them. Are your messages worth reading, or are you simply blasting out tweets for no reason? Content is the cornerstone of any successful social media campaign, and as the folks over at Skittles demonstrated, there are many options when creating an online voice that works for you.