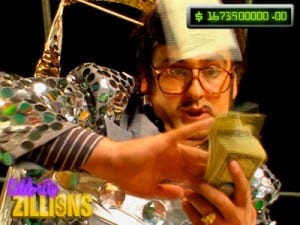 Warren Buffett is like a Scrooge McDuck for the Modern Age – incomprehensibly wise, universally philanthropic and obnoxiously loaded. Buffett’s net-worth exceeds some third-world countries’ annual GDP, a sum he accrued through years of shrewd business investments – and now he wants to give you a piece of that fortune.

A billion-dollar piece of it.

Buffett has teamed with Yahoo and Quicken Loans for a March Madness bracket-challenge, and the sage soul that completes their bracket with all of the winning teams will take home a billion-dollars of Buffett’s cash.

While that all sounds well and good, before you take to your keyboards in pursuit of your status as America’s next billionaire – here’s the caveat: the odds of correctly filling out a March Madness bracket is 1 in 9.2 quintillion. Statistically, you have a better chance of being struck by lightning twice while simultaneously being consumed by a school of cybernetic sharks that juggle in their downtime.

Although the odds are colossal, the promotion is a stroke of publicity brilliance, as aside from the global attention it’s receiving, it also bolsters Yahoo’s user-base (it requires an account to signup), and involves a brief questionnaire provided by Quicken Loans regarding personal information. Essentially, the Billion Dollar Bracket Challenge is serving as a lead-generation service for Quicken, and a boost for Yahoo, a search-engine in decline since Google took over the universe.

Contest creators are estimating that as many as 15 million people will participate, which is vast exposure for Yahoo and an ever-expanding litany of names for Quicken Loans’ associates to contact–who just may be in need of a new car or home. It’s a solid example of the PR absurdity that exists and the lengths that corporate America and its elite will go to for widespread media attention.